TWO FOR TWO: NORTH EAST’S SECOND RUN AT THE MULTISTRADA

THE FIRST GENERATION Ducati Multistrada is one of the under-appreciated gems of the custom world. It’s got a well-earned reputation as a bang-for-the-buck bike with ‘good bones’—mixing competent performance and handling with quirky looks. That Terblanche-penned aesthetic is admittedly an acquired taste, but luckily for us, a handful of custom builders have figured out how to fix it. 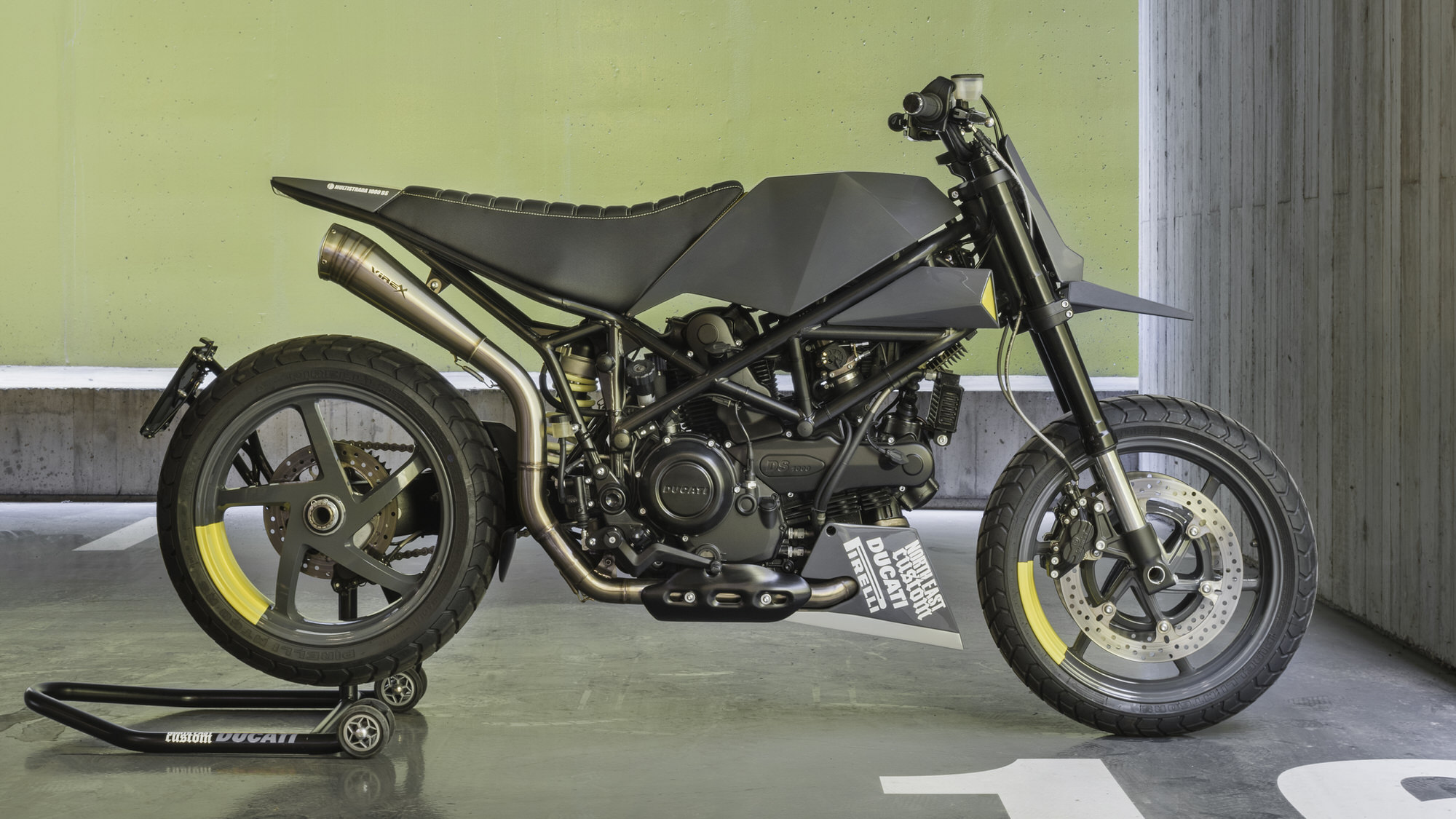 The Coppiello brothers at North East Custom in Padua, Italy have cracked the code not once but twice. Their first Multistrada custom was a sleek cafe racer with an almost-factory feel; this time round, they’ve gone in an entirely different direction.

This new build has a futuristic vibe with a hint of supermotard styling. It’s a sharp new look for the Ducati, without compromising the riding experience. And it’s a style that plays to North East’s strengths—the guys are keen off-road riders, and supermotards are basically dirt bikes for the street.

Diego and Riccardo built this 2003-model 1000 DS for a client, and picked it specifically for its value. “We chose the Multistrada because it has a good engine and chassis,” Diego tells us, “but it’s also a cheap Ducati—perfect for our project.”

Inspiration for the design came from the triangles that are formed by the signature Ducati trellis frame. The brothers set out to echo those shapes by fabricating all-new angled bodywork out of steel. 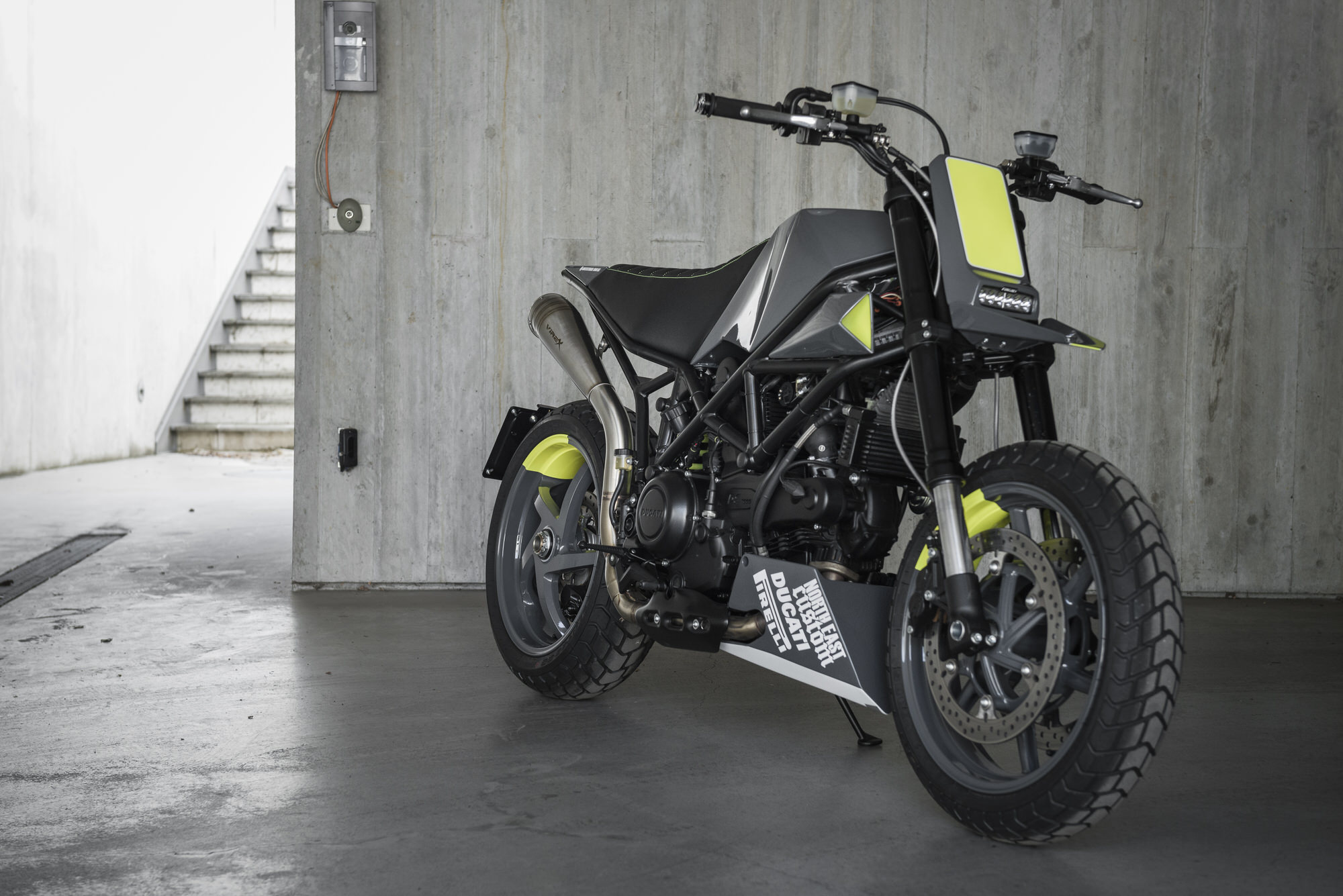 The setup starts with a new fuel tank, equipped with the filler cap from a Honda Hornet and flanked by a pair of custom air intakes.

Behind it is a generously padded bench seat—shaped like a modern supermoto unit, and covered in a synthetic fabric with a textured effect up top. It sits on a custom subframe, and corrects one of the main weaknesses of the original bike.

There’s a sharp tailpiece to tie the back-end together, with a one-off taillight tucked into the frame rails. The guys built it using a lens that was CNC-machined from Plexiglas, and gave it LED internals.

The front light’s a rectangular LED unit from Rigid Industries, integrated into a hand-made, motocross-style nacelle with a stubby front fender. 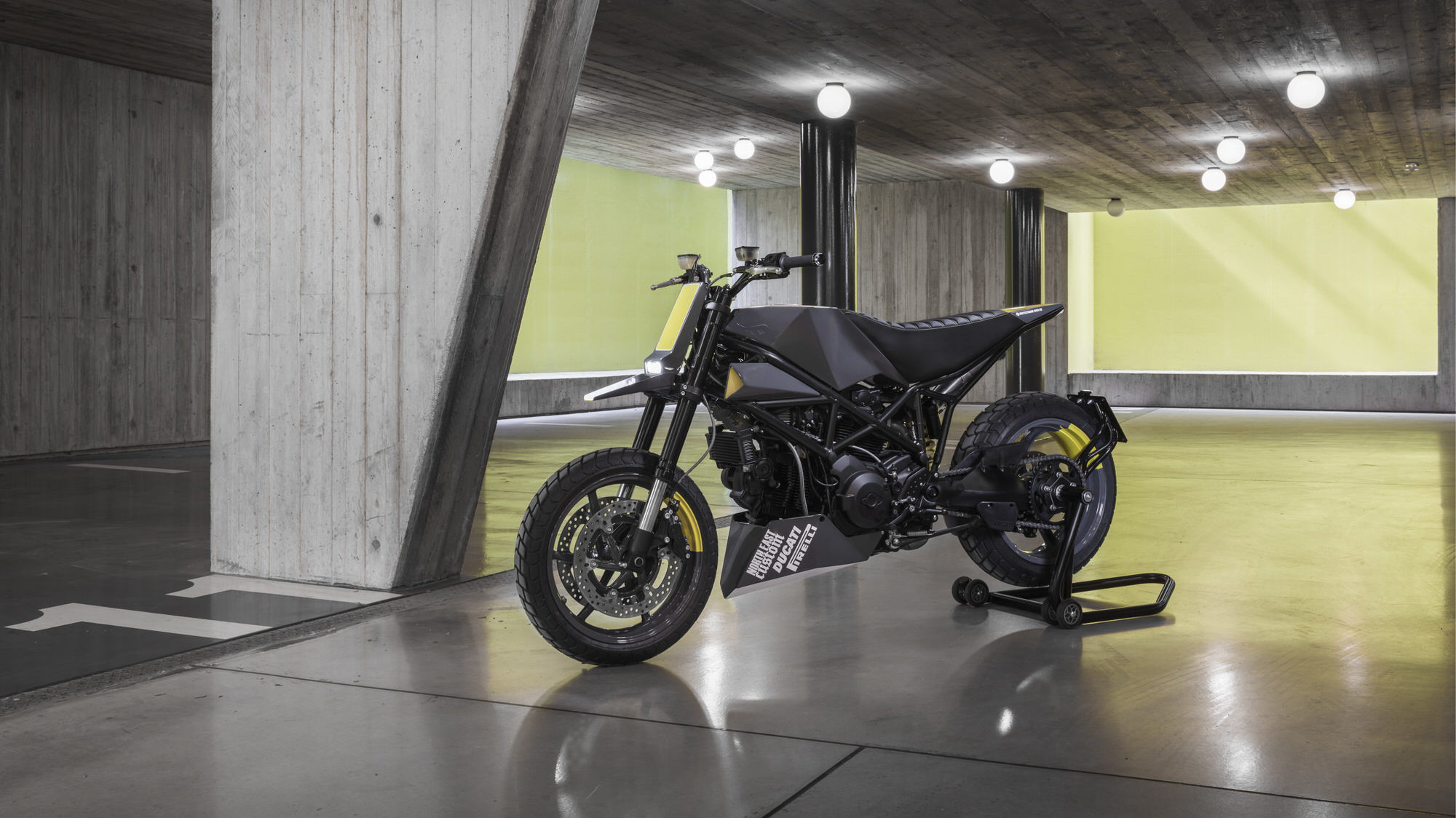 The guys decided not to mess with the Ducati’s engine internals, but they did install a K-Bike slipper clutch. The exhaust is a two-into-one stainless steel branch and muffler from Virex, and the air filter’s been swapped for a K&N part. Diego and Riccardo also remapped the ECU to optimize it for the new exhaust and intake.

The Ducati’s minimalist livery is a great match for its aggressive new lines. It’s a mostly grey affair, with bursts of yellow, and the theme extends to the wheels and rear shock spring, too. Take a close enough look, and you’ll even spot yellow stitching on the saddle.

It’s common for builders that get it ‘right’ with a specific make and model to stick to the same formula the next time round. But North East have gone two for two with the Multistrada—in totally different styles, but with equally spectacular results.

It’s another clever take on the versatile Ducati dual sport—and another incentive to start scanning the classifieds for a bargain.

REVEALED: THE TOP 10 CUSTOM MOTORCYCLES OF 2020